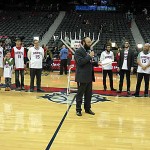 From pre-game ceremonies to center-court celebrations, large-scale public Chanukah events will light up more sports stadiums and arenas across America than ever this year, part of Chabad’s worldwide Chanukah campaign, which is expected to reach an estimated 8 million Jews-more than half of the world’s Jewish population.

For the second year in a row, Chabad Lubavitch of Georgia will host a “Jewish Heritage Night” at the Atlanta Hawks’ Philips Arena on Tuesday, Dec. 23, at 7:30 p.m., and more than 1,000 people are expected to attend, according to Rabbi Isser New.

“The mitzvah of Chanukah is to publicize the miracle. This is a way to take that to the next level,” he says. “The message of Chanukah is the triumph of the minority; it’s an important and timeless message.”

At the game will be a kosher concession stand, as well as a “Family Fun Zone” with Chanukah-themed activities for children in one of the sections.

In Texas, Chabad Outreach of Houston will host “Hoops & Hanukkah” on Thursday, Dec. 18, with a menorah-lighting during halftime at the Houston Rockets vs. the New Orleans Pelicans basketball game.

“It’s an awesome medium to do it,” said Rabbi Mendy Traxler of Chabad Outreach of Houston, who will be lighting the menorah.

Chabad has been holding this program for about six years, and this year already sold 625 tickets, in addition to those who will otherwise be attending the game. The first 350 people who purchased tickets received free “Hoops & Hanukkah” T-shirts.

Before the game is a Chanukah-themed pregame party, beginning at 6 p.m., at Root Memorial Square Basketball Court across the street from the stadium, with a 6:10 p.m. outdoor menorah-lighting ceremony, adds Traxler. That’s in addition to the one inside the stadium.

At 10 p.m. after the game, Chabad ticket-holders will have the chance to go onto the court and make some “free throw” shots.

Part of the marketing for the event included a “Hoops & Hanukkah” Facebook page, where the more than 1,200 people have been invited.

“Houston is a great community,” he says. “The event is a great chance to bring people together to celebrate Chanukah and build Jewish pride.”

Additionally, 5,000 menorah-topped cars are expected on the roads this year, creating holiday awareness in cities, towns and rural areas.

Events will be featured on the world’s largest Chanukah-event directory at Hanukkah.org/Events. The directory features events in 400 cities, and is constantly being updated.

In South Florida, the professional basketball team the Miami Heat will host a Chabad menorah-lighting ceremony on the court between the first and second periods on Wed., Dec. 17. Nearly 20,000 people are expected to be there that evening.

The Florida Panthers, a professional ice-hockey team in Sunrise, Fla., will host a Chabad-run menorah-lighting on the ice and a concert at halftime on Tues., Dec. 16.

And in New York, CTeen-Chabad’s global Teen Network-has what promises to be another exciting “Jewish Heritage Night” in the works for the entire family as the Brooklyn Nets gear up for their third season in their new home at the Barclays Center in Brooklyn, N.Y.

This year’s event will take place on Sunday, Dec. 21, at 5:30 p.m., on the sixth night of Chanukah and the first day of winter. Building on the turnout of last year’s Jewish Heritage debut at the Barclays Center, organizers expect more than 6,000 Jewish attendees out of a total capacity of about 20,000 spectators.

Chanukah events will be hosted at other arenas across the United States, including the NBA stadiums of the Orlando Magic, San Antonio Spurs, Houston Rockets, and Dallas Mavs, as well as the NHL arenas of the Nashville Predators, Detroit Red Wings and the Columbus Blue Jackets.

In 1987, Rabbi Raphael Tennenhaus, co-director of Chabad of South Broward in Hallendale, Fla., was the first Chabad emissary to light a menorah at a sporting event, during halftime of a Miami Dolphins football game at what was then called the Joe Robbie Stadium. More than 75,000 fans were on hand, and both teams were on the field during the 15-minute Chanukah ceremony.

“Baruch Hashem, by now, shluchim are doing this at sporting events around the world,” says Tennenhaus.

He estimates out of the total number of fans that day, about 20,000 of them were Jewish.

“Even 27 years later, people still come over to me and ask if I was the guy who lit the menorah at the stadium,” says the rabbi.

These days, one of the biggest events in his locale is the 35th Annual South Florida Chanukah Festival on Monday, Dec. 22, at 7 p.m., at Gulfstream Horse-Racing Park in South Hallandale, Fla. It will feature popular musical entertainer Avraham Fried.

For the sixth year in a row, Chabad of Nashville, Tenn., will host a menorah-lighting during halftime of the Nashville Predators ice-hockey game, at the Bridgestone Arena in front of 17,000 fans on Tuesday, Dec. 16, at 6:30 p.m.-the first night of Chanukah.

“The sense of Jewish pride and respect is immense, and it always brings about great exposure for what we try to do on Chanukah, which is to share and spread the light,” says Rabbi Yitzchok Tiechtel, co-director of Chabad of Nashville, who every game there wears a Predators jersey with the word “Rabbi” on the back.

Last year, the arena replayed the menorah-lighting on the Jumbotron later during the game; this year, the enormous screen will feature the words to Chanukah songs.

“The whole crowd was going crazy,” he recalls. “The city is so respectful. There’s no greater sense of Jewish pride than lighting a giant menorah in front of thousands of cheering fans.”

On Monday, Dec. 22, the seventh night of Chanukah, co-director of Chabad of S. Francisco Rabbi Yosef Langer, and Rabbi Dovid Labkowski, co-director of the Chabad Jewish Center of Oakland, Calif., will light the menorah outside the Golden State Warriors’ basketball stadium in Oakland.

They’re organizing a Chanukah celebration with Jewish music, latkes and sufganiyot (jelly donuts) in front of Oracle Arena as the Warriors prepare to face off against the Sacramento Kings. This is in addition to the annual outdoor public menorah-lighting on the first night of the holiday-on the six-foot menorah provided by the Bill Graham Menorah Project and sponsored by Norman Krug, who is affiliated with the S. Francisco Chabad.

This is their first Chanukah holding such an event, which came together with the help of Langer’s friend and Chabad supporter Howard Sapper, who helped promote the idea to the Warriors.

The 7:30 p.m. event is part of a longtime larger “Jewish Heritage Night” concept the rabbi helped jump-start at area sporting events. Known as the “Rally Rabbi,” he first started Jewish outreach at games eight years ago, when some friends asked him to organize such a program at the San Francisco Giants game.

For the Chanukah event, Langer plans to be there with his black-and-burgundy mitzvah bike, a motorcycle he bought years ago at an auction and had refurbished.

There’ll be at least 1,000 kosher doughnuts and latkes for sale at the event, which will be held outside the stadium’s main entrance. “People passing through are going to stop by-the latkes alone are very inviting,” he entices.

More than just food and festivities, he says there’s a message that he hopes speaks to passers-by, which should include the game’s 600-plus ticket-holders.

That message, according to Langer, is “that a little light pushes away a lot of darkness; that everyone is free to practice and have a relationship with G‑d; and that miracles are not passé. They’re still within our grasp.”

He stops for a moment, and then adds: “And to be open and inclusive. This is something not just exclusive for Jewish people; this is something the whole world can take part of, and light up their lives, and the lives of their families and communities with the message of Chanukah.”