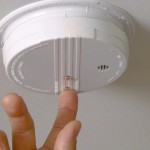 New York state will soon require all new smoke detectors to contain 10-year, nonremovable batteries in a move to discourage tampering and ensure the devices continue to work even if the owner fails to check on them, NBC NEW YORK reports.

The mandate, signed into law by Gov. Cuomo on Monday night, will prohibit the sale of detectors with traditional, replaceable batteries as of Jan. 1, 2017. States including California and Maryland already have similar requirements.

The measure’s supporters say they expect the law to save lives and note that fire deaths have been cut in half since the state first required smoke alarms in homes starting in 1961.

“They are without question the most important safety device a person can have in their home,” said the bill’s sponsor, Assembly Majority Leader Joseph Morelle, D-Rochester. “Unfortunately, the data clearly demonstrates that the majority of fire-related deaths transpire in homes without working smoke alarms or no alarms at all.”

The long-life batteries make it difficult for an occupant to disable the device when it’s activated by cooking, cigarette smoke or a drained battery. And residents will no longer have to remember to change the battery every six months, according to the Firemen’s Association of the State of New York.