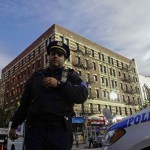 New York City police officers were reminded Tuesday in a memo to be on heightened alert ahead of the especially busy holiday season when tourists flock to the Big Apple, law enforcement sources told PIX11 News Tuesday.

Separately, a federal law enforcement source told PIX11 of a specific possible threat that could face any one of several major U.S. cities. Few details were released about the nature of the threat.

NYPD officials told PIX11 after the release of this report that there is no specific “credible threat,” as the earlier version of this report, based on sources, had stated.

All New York City police officers received a bulletin Tuesday afternoon outlining the department’s tactical plan and warning officers to stay vigilant, according to sources. That internal memo mentioned social media being used as a tactic and that a possible attack could come without warning.

Expect to see increased police presence at iconic locations across multiple boroughs, including Times Square, St. Patrick’s Cathedral for Midnight Mass on Thursday, and Barclays Center in Brooklyn, marking the first time a threat has sparked a swell of police presence in a borough other than Manhattan.

This comes exactly one week after a menacing email was sent to public school districts in New York and Los Angeles. That “specific” message, which Bratton said contained outlandish threats. Officials in New York determined the emailed threat was a hoax.