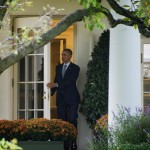 A previously unknown White House breach occurred in 2008 when two German tourists entered White House grounds, undetected by Secret Service guards, by entering an exit gate on the North Lawn while other tourists were leaving. The two tourists were spotted by a Secret Service agent and a sergeant in the uniformed division taking photos under the North Portico with cameras, which are prohibited (cell phone cameras are OK).

It was determined that the tourists did not pose a threat.

The next day, Secret Service officers installed a serpentine bike rack to make it more difficult to enter the White House grounds the way the German tourists did. Read more at the Washington Examiner.