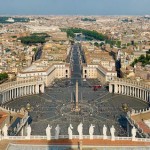 The Vatican’s Commission for Religious Relations with the Jews released a document on Dec. 10 that emphasizes the Jewish roots of Christian faith, and stresses that God first revealed himself to the Hebrews.

“The Church is therefore obliged to view evangelization to Jews, who believe in the one God, in a different manner from that to people of other religions and world views,” the document says. “In concrete terms this means that the Catholic Church neither conducts nor supports any specific institutional mission work directed towards Jews.”

The Vatican document also says: “A Christian can never be an anti-Semite, especially because of the Jewish roots of Christianity.”

At a press conference introducing the Vatican document, Rabbi David Rosen of the American Jewish Committee expressed satisfaction with the forthright statement that Catholics should not engage in programmatic efforts to convert Jews.