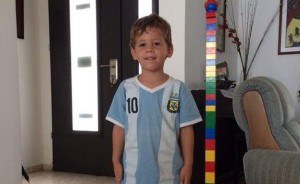 According to the report, in the beginning of next week, the government is expected to approve the establishment of five new communities in the Negev, among them “Daniel,” which will be located in Merhavim, in close rocket-range of Gaza.

“Establishing a community in Daniel’s name is a clear message to terrorists,” Shai Hajaj, head of the Merhavim Regional Council in the northern Negev, told Channel 2. “You murder children, we enhance settlement. This settlement is being built on lands that were pummeled by missiles from Gaza, and we are very moved about memorializing Daniel’s name for generations to come.”

Daniel Tragerman was killed on August 12, 2014 — two weeks before an open-ended ceasefire between Israel and Hamas was reached — when a fragment from an exploded mortar shell penetrated the wall of his house in Kibbutz Nahal Oz and struck his head.

A week before the horrifying incident in which their young boy was killed, Gila and Doron Tragerman returned to their home, after having evacuated it when the war broke out a month earlier, on July 8.

Daniel was killed in front of his mother, father, three-year-old sister and four-month-old brother. The family has since moved to a new house, according to Channel 2.