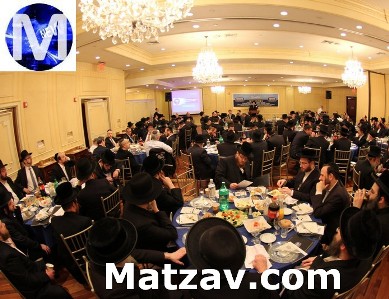 Brooklyn NY…In what was dubbed as a historic breakthrough for the Orthodox community living in the five boroughs of New York City, Dr. Barbara A. Sampson, the Acting Chief Medical Examiner for the City of New York, unveiled major new protocols that will go a long way in accommodating Orthodox Jews. The occasion was a breakfast meeting organized by Misaskim at the Renaissance Hall for some 200 Jewish community leaders. The new far-reaching procedures will in most cases expedite burial, facilitate transfers for burial in Eretz Yisroel, and eliminate the possibility of chillul Shabbos.

The new policies put into place by Dr. Sampson follow many years of efforts by Misaskim to change procedures  that caused great distress to many families. Dr. Sampson thanked Misaskim for their efforts and went on to outline some of the changes that are being instituted. She explained what the legal mandates are for reporting cases. One example cited as a reportable case was an accident or shooting victim who ultimately dies, even years later at home.

Yanky Meyer, the CEO of Misaskim praised Dr. Sampson for her sensitivity and understanding in accommodating the community. A prime example were accommodations made to our community in “reportable cases” that occurred during business hours, after hours or Shabbos and Yom Tov. To facilitate the process in the event of such an emergency on Shabbos or Yom Tov, Misaskim retains non-Jewish workers who are familiar with the procedures and act as intermediaries with the authorities. If petira occurs in an institution such as a nursing home or home for adults, the ME will talk to the attending physician and clear the body for burial. If, for example, a reportable death occurs with a patient with a medical history due to surgery or a procedure, they will no longer have to wait till the next day until the body could be brought to the office of the ME. The Medical Examiner will dispatch an investigator to the institution.

Dr. Sampson indicated that if necessary, her offices would reopen after hours in a case where the body must be legally brought in, thus facilitating kevurah locally or transfer to Eretz Yisroel for burial. In case a body is brought in and the office is opened after hours for an examination (i.e. x-rays and photography, and not an autopsy), borough chiefs will now have laptops and will be able to issue death certificates remotely.  Another point of contention in the past was the insistence by ME staff to fingerprint a decedent even after being identified by a family member, thus causing delays that can interfere with burial before shkia or even prevent a body from making the flight. After Misaskim’s intervention, the ME can now forego the fingerprinting.

Menachem Lubinsky, community leader and President of Lubicom Marketing Consulting opened the breakfast by calling the event “not a customary breakfast of honors for elected officials, philanthropists, institutions and causes but a breakfast to honor custom, tradition, and Jewish law.” Harav Moshe Tuvia Lieff, the Moroh D’Asrah of Agudas Yisroel Bais Binyomin, praised the tireless work of Misaskim, and focused on the holiness of the Shabbos and the sanctity of the soul. “Oh how sad it was for those Jews who were cremated during the holocaust, but they could not destroy the soul.”

One of the participants who had experienced the intervention of Misaskim first hand was Assemblyman Dov Hikind, who learned while vacationing in Florida nearly a month ago that his older brother had suddenly passed away. “I experienced what Misaskim means to our community first-hand and sometimes we don’t appreciate the importance of such an organization, until we are personally involved,” said Assemblyman Hikind. “What Misaskim did for us was tremendous – what a chesed!”

Mr. Yanky Martin experienced the activism of Misaskim and the benevolence of the office of Dr. Sampson first hand when his mother passed away in a hospital on an Erev Shabbos, potentially holding up the kvurah until after Shabbos. Mr. Martin had high praise for the Medical Examiner and Misaskim: “She realized the sensitivity of kvod haniftar — it was only able to happen through Dr. Sampson  and Misaskim.”

Mr. Meyer recounted how on  November 18th Hatzoloh responded to a call at 4:30 in the morning of a child in distress who ultimately passed away. That afternoon another toddler passed away in Flatbush, the 9-month old child of Rabbi Zev Gottesman, a first grade teacher. The rabbi and his wife, despite their shock, decided to have their son buried in Israel next to his grandparents. Since it was after hours, the ME quickly opened the office where the body of the toddler was brought, and  arranged  to find an x-ray technician and a photographer so the body could make the flight for burial in Eretz Yisroel. Said Rabbi Gottesman: “There is no place I would rather be on a Sunday morning than in my first grade classroom, teaching my students. Yet, here I am standing before this special group of people. Why? The answer is two words, Hakoras Hatov.”

For Yidel Meisels, the pain of losing a child was far more than he could bear. But to have 19 police officers in his home on Shabbos was beyond tolerable. But in the end thanks to Dr. Sampson and Misaskim, the body was not moved until after Shabbos, avoiding chilul Shabbos.