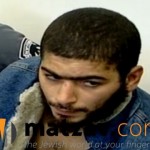 The manhunt for the Tel Aviv terrorist Nishat Milhem, who murdered 2 Israelis, continues. Despite the fact that the authorities have yet to catch Milhem, in the past few days, the manhunt for him advanced and a new clue has been discovered. However, at the moment, the exact details related to the investigation are still under a gag order.

Without breaching the gag order, it can be reported that Shin Bet and Israeli Police investigators discovered new information regarding the terrorist’s escape route. In the wake of discovering this information, Police Commissioner Roni Alsheich announced yesterday that the alert level in Gush Dan will be lowered.

At the moment, it appears that Mmilhem’s exact location is still unknown. However, according to the leading assessments, the terrorist is probably hiding in the West Bank.

The terrorist’s brother, Gudat Milhem, was suspected of aiding him and arrested but he was recently released. Today, Gudat made a public announcement and, while crying, begged his brother to turn himself in. “I’m innocent, everyone here is suffering,” said Gudat. “We are sorry for what happened.”

“He needs to think about his brothers, his mother, his father,” added Gudat. “He should look at how were are living now. Everyone is shocked, no one can bring himself to believe it. He should look- we are all traumatized.” Jerusalem Online