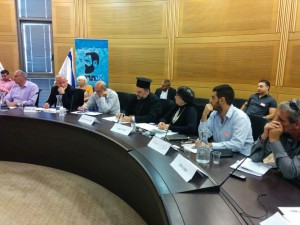 Amidst the latest terrorist attacks and violent riots by Arabs in Israel, a new lobby was launched in the Knesset to encourage members of minority groups to join the IDF and National Service.

The launching event for the Lobby for Drafting Minorities to the IDF and National Service, initiated by the “Im Tirtzu” movement, was held at the Israeli parliament on Wednesday, October 14.

“In my home, my family and my village it’s pretty obvious why I chose to join the IDF,” said Mohammad Kaabia, member of a group that encourages Bedouins to join the army, during the event. “But for other people it isn’t clear, and I’m always asked what I get from it, why should I volunteer when I don’t have to.”

Lobby co-head, MK Miki Zohar, said in his opening speech that “the incitement against joining the IDF, encouraged by the Arab MKs, poses a direct threat to minority integration in Israeli society.”

“This insane reality, in which Arab MKs funded by taxpayer money incite against the state and against the IDF, must stop,” added MK Zohar.

MK Meirav Ben-Ari, the other co-head of the lobby, stated that “in these tough times, assembling this lobby to encourage and promote recruitment of minorities to the IDF and to National Service highlights the strength and unity of Israeli society.”

Matan Peleg, head of “Im Tirtzu”, pointed out that despite the wave of terrorism Israel has been experiencing for the past weeks, the event was an occasion to celebrate. “It is a celebration for democracy- and for the State of Israel. A celebration of national strength and faith in Zionism.”

Father Gabriel Naddaf, from Nazareth, who is the spiritual leader of the Christian IDF Forum, commented on the general condition of minorities in the Middle East.

“In these days, when the Middle East is drowning in pools of blood, when our Christian brothers and sisters and other minority groups are being slaughtered, the State of Israel stands out as an island of sanity in the Middle East,” said Father Naddaf. “Serving in the security forces is an honor, rather than a duty.”