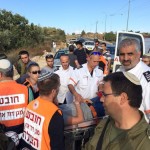 The directive, issued by the IMA’s Ethics Committee, effectively changes existing triage guidelines. Under the current directive, patients are not to be prioritized solely on the basis of injury severity but also on the principle of “charity begins at home,” meaning treating the victims of a terrorist attack before the terrorist himself, even if it appears the attacker’s wounds are more serious.

Under the revised directive, patients are to be prioritized on the basis of medical considerations only. This means first responders may face situations where they must treat a terrorist before tending to the victims.

“In all cases of terrorist attacks, the medical teams should treat the victims and only thereafter the attacker,” Cherlow told JNS.org. “Only in those instances where there is confusion to the extent that it cannot be easily determined who is the terrorist and who is the victim should the medics choose to first treat the most heavily injured.”

The IMA’s Ethics Committee is the only body in Israel authorized to set the ethical standards for medical care, and medical and other emergency personnel on all levels are bound by its guidelines.

“Doctors are not judges….It’s very easy to make mistakes when dealing with a mass-casualty event, and a doctor at the scene cannot be expected to pinpoint victims’ identity—he has to focus on saving as many lives as possible,” IMA Ethics Director Tammy Karni told Israel Hayom on Tuesday. “It’s unfair to burden doctors with additional triage criteria that have nothing to do with patients’ welfare.”