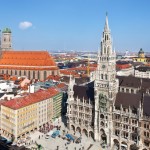 A new Israeli consulate opened in Munich, Germany, in close proximity to Adolf Hitler’s former office and the former headquarters of the National Socialist (Nazi) Party.

Israelis will now be able to apply for visas and renew their passports at the new consulate building, which was rented out to the State of Israel.

“There is no place for xenophobia or Anti-Semitism in this country,” Seehofer said at the ceremony, the German TV news channel Bayerischer Rundfunk reported.