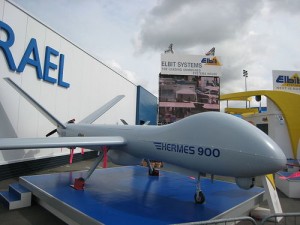 The Israeli Air Force introduced a new unmanned aerial vehicle into its operational lineup Tuesday, in a move a senior officer said would “revolutionize the drone world.”

Manufactured by Elbit Systems, the Hermes 900 can remain airborne for more than 30 hours, and can fly at an altitude of 30,000 feet. The innovative drone is equipped, among other things, with state of the art electro-optical and infrared sensors, synthetic aperture radar capabilities, and advanced communications and electronic intelligence systems.

The Hermes 900 is the first drone included in the IAF’s UAV lineup in 16 years, and it means to improve on its predecessor, the Hermes 450, an advanced drone that can remain airborne for 20 hours.

A military source told Israel Hayom that the Hermes 900 was first used during 2014’s Operation Protective Edge in the Gaza Strip, when the IAF decided to put the then still-under-development UAV to the test, which it passed with flying colors.