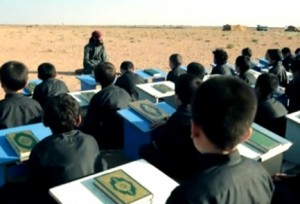 In the opening scene of the video, an Islamic State member is seen looking at photos of Israeli soldiers and of Netanyahu on Facebook.

The video then cuts to show young boys sitting at desks in the middle of a desert, as a teacher preaches about Islam, speaking about the fate of Jews and infidels. Afterward, the boys are shown learning hand-to-hand combat.

The video warns that these young terrorists, “the children of the caliphate,” will come to Tel Aviv “and behead you.”

The boys are then shown playing war games with Islamic State prisoners, where they are taught how they are expected to treat them.

The jihadi group had already released two Hebrew-language videos threatening Israel. The videos warn that the current wave of Palestinian terrorism is nothing compared to “the real war” that has yet to begin.