On December 8th, the Los Angeles County Medical Examiner-Coroner’s Office inaugurated its new CT scanner with a ribbon-cutting ceremony attended by more than fifty people. The scanner was procured through grants and funds from the LA County Board of Supervisors at the behest of Agudath Israel of California. LA is the fourth city in the country to have such a unit designated for post-mortem purposes.
The impetus to purchase this specialized equipment was the  untimely death of a young Jewish child and the difficulties the family faced in dealing with post mortem issues. Following that tragic incident, the child’s family joined Dr. Irving Lebovics and Stanley Treitel of Agudath Israel in a meeting with County Supervisor Zev Yaroslovsky to inquire about obtaining a CT scanner for the Medical Examiner-Coroner’s office. This would allow for digital autopsies in many cases instead of invasive dissections. The scanner would also help relieve the backlog of cases in the understaffed ME-Coroner’s Office, in a quick and more cost efficient manner. Mr. Yaroslovsky led the charge at the Board of Supervisors and a unit was purchased in 2015. Since beginning operation in May of 2016, the scanner has been used in over 400 cases and is expected to be used in about 10 cases per day.
At the ribbon-cutting ceremony, Agudath Israel was one of the groups singled out for its efforts by Interim Chief Medical Examiner- Coroner Dr. Lakshmanan Sathyavagiswaran, and representatives of the County Board of Supervisors. In his remarks, Dr. Lebovics spoke of how the purchase of the new machine was a win-win for all involved. “It will greatly help the operations of the ME-Coroner’s office”, said Dr. Lebovics, “while enabling the proper care of Jewish decedents, and potentially those of other religious faiths.”
Dr. Lebovics and Stanley Treitel were joined by Rabbi Berish Goldenberg, a member of the Presidium of Agudath Israel of California, at the ceremony. The Plotzker family, parents of the young deceased child, were honored to cut the ribbon. 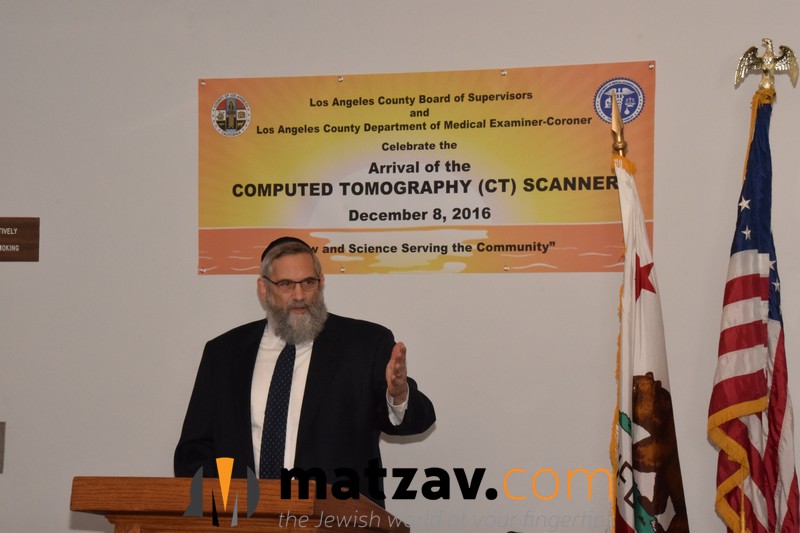 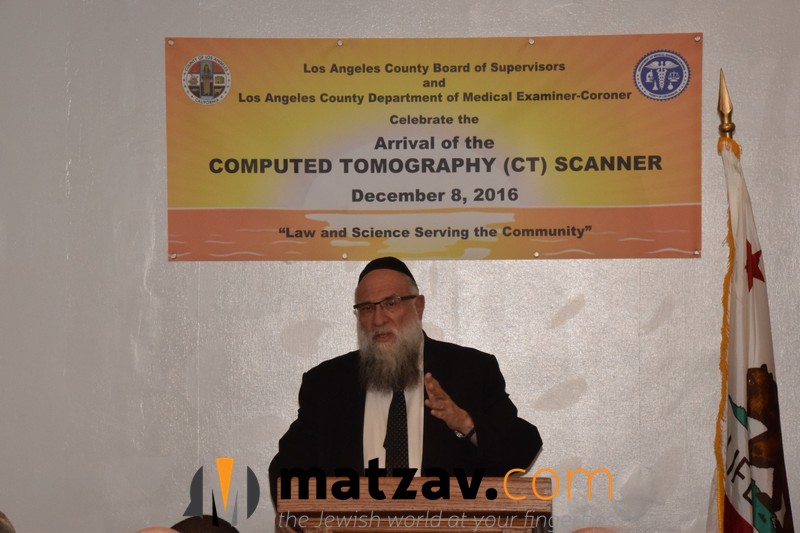