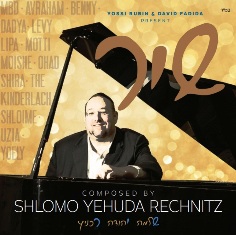 The album is slated for public release on Sunday, August 17th, through Aderet Music in Brooklyn, NY, at a price of $16.99.

All future proceeds have been dedicated by Shlomo Yehuda Rechnitz to aid our brethren in Eretz Yisroel who are readying themselves to begin the new Shemittah cycle.

CLICK HERE to listen a sample of the album.