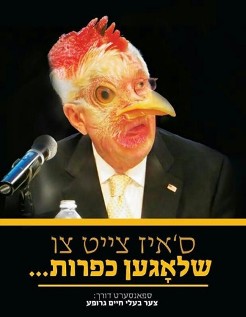 Some will call this “fowl play.” Others will say not to play chicken.

Either way, this is anything but pareve.

A new ad has DA Charles Hynes – who is running for reelection for Brooklyn district attorney – looking like a Kapparos chicken. The ad says underneath the picture in Hebrew, “It’s time to shlug Kapparos.”

Although the face of the person in the ad is covered by the chicken, it is clear from the hair, jacket, lapel pin, tie and posture that the individual is Hynes.

New York City Councilman David Greenfield, who has backed Hynes, responded to the Kapparos ad by calling it “appalling.” Greenfield told the NY Daily News that the ad implies the Hynes’ opponents wish to “see Joe Hynes killed in the ritual tradition of slaughtering chickens.”

The bottom of the ad, obviously in jest, says that it is sponsored by “The Tzaar Baalei Chaim Group.”