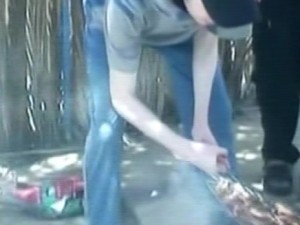 Four days after releasing footage of Gilad Shalit in captivity, Hamas revealed a more detailed documentation of the abducted IDF soldier’s time as a prisoner in Gaza, Israel’s Channel 2 reported on Sunday.

In one scene, for example, Shalit is seen sitting on the floor being served a cup of coffee by a guard. In another, he is filmed eating and drinking – and looking merry — with the captors. What appears to be a sealed room has several mattresses on which Shalit and the men likely spent the nights.

In spite of media reports that Shalit had spent his entire five years in an underground bunker, according to Channel 2, this new video includes footage of Shalit in a lit area resembling a yard or balcony of some sort, where he is flipping meat on a grill. Here, too, he appears to be smiling, though he is pale and extremely thin.

In yet another scene, Shalit is seen relaxing and watching television.

Channel 2 reported that sources close to Shalit responded negatively to the release of the footage, calling it Hamas propaganda — “an act for the camera that took place after years during which Gilad lived in darkness, never going outside.”

According to Channel 2, last week Mohammed Deif, the head of the Izz ad-Din al-Qassam Brigades — Hamas’ military wing — published the names of the five members of the organization who kept watch over Shalit during his captivity. This came on the heels of the death of the last remaining survivor among them, who was killed when the southern Gaza tunnel he was in collapsed. Each of the four others died under different circumstances after Shalit’s release in 2011 — as part of a prisoner swap between Israel and Hamas. Shalit was returned to Israel in exchange for 1,027 terrorists, mostly Palestinian and Israeli-Arab, but also a Ukrainian, a Jordanian and a Syrian.

It is not clear if the five guards in the video were the only ones who held Shalit during his captivity, or whether he had been held in the same place throughout the five-year period, said Channel 2.

Watch the Hamas video below: