Netanyahu visited the Haifa Navy base on Tuesday, along with IDF Chief of Staff Gabi Ashkenazi and Israeli Navy Commander Eli Marom. After touring the missile boat and speaking of the dangers of disobedience in the military, the prime minister’s hosts also wished to show him the inflatable boat the fleet uses. As he made his way between the vessels, after descending down the ladder, the prime minister stumbled, slipped, and was caught by his military security guard.The near fall seemed worrying for a moment, but Netanyahu immediately got back up on his feet and continued the tour as planned. 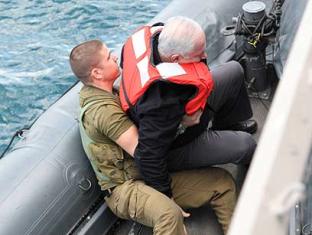 It should be noted that this is not the first time Netanyahu tackled the waves. One of the best known stories in the history of Sayeret Matkal (the General Staff Reconnaissance Unit) is that of a young fighter in the in the early 1970s – Binyamin Netanyahu – who fell out of an inflatable boat into the Suez Canal during an operation in which the boat was carrying heavy combat equipment.

Another fighter taking part in the operation managed to pull Netanyahu out of the water and back into the boat.