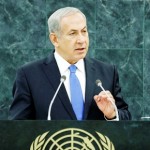 Israeli Prime Minister Bibi Netanyahu warned that the Hamas and Islamic State terror groups are “branches from the same poisonous tree” in his address at the United Nations General Assembly in New York on Monday.

Netanyahu said that Arab nations are beginning to realize the benefit of aligning with Israel against Iran, which he said is not willing to give up the prospect of obtaining nuclear weapons.

The prime minister also took time to respond to Palestinian Authority President Mahmoud Abbas, who on Saturday at the U.N. said Israel committed “absolute war crimes carried out before the eyes and ears of the entire world” during this summer’s war with Hamas in Gaza. Abbas called on the U.N. to pass a resolution setting a deadline for Israeli withdrawal to the pre-1967 borders.

Israel “has faced a propaganda war because in an attempt to gain sympathy, Hamas used human shields, homes, and hospitals to fire rockets at Israel, while Israel surgically struck military targets,” Netanyahu told the U.N. on Monday. The Israel Defense Forces (IDF) did its best to minimize civilian casualties, and while Palestinians “were tragically and unintentionally killed,” the IDF was not targeting Gazan civilians, said Netanyahu.

Regarding the long-term prospects for peace, Netanyahu said Israel “is prepared to make painful compromises” with the Palestinians.

“We believe that the Palestinians should be neither the citizens of Israel nor its subjects,” he said. “They should live in a free state of their own. But they should be ready, like us, for compromise. And we will know that they’re ready for compromise and for peace when they start taking Israel’s security requirements seriously and when they stop denying our historical connection to our ancient homeland.”