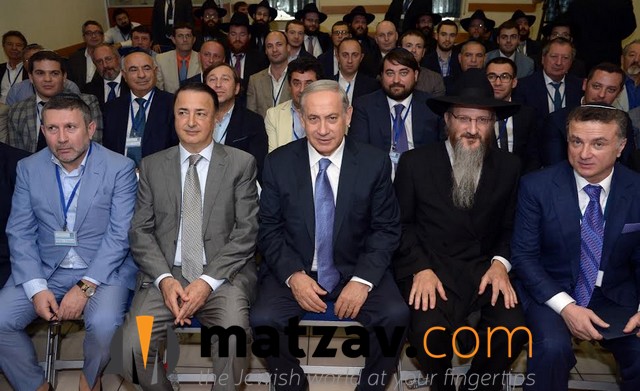 On Sunday, Israeli Prime Minister Bibi Netanyahu met with a delegation of representatives of the Russian Jewish Community, headed by the chief rabbi of Russia, Rabbi Berel Lazar and Mr. Lev Leviev, President of the Federation of Jewish Communities of the CIS (FJC).

The delegation has asked to deliver, through the Prime Minister, a message of solidarity with the people of Israel, who are facing this current outburst of terrorism. “The delegation arrives during these troubled times, in order to show the world that now is the time to come and visit the country”, said Mr. Leviev during the meeting.

Chief Rabbi Lazar added that “we have come in these dire times to strengthen the people of the holy land. All of Russia’s Jewry is praying for you. We are here to tell you that we are standing by you in these hard times”. During the last few days the Delegation has visited Kever Rachel (Rachel’s Tomb) near Bethlehem, The cave of Machpela near the city of Hebron and the western wall, where the delegates visited the famous “Western Wall tunnels”. As part of their tour, the delegates have met with the soldiers stationed at those sites, whom are dealing with restoring the order to those areas. In the course of their visit, the delegates have even come across some riots in the area.

The delegation consists of fifty Rabbis, leaders and head of communities, as well as business people from all over Russia, including the cities of: Rostov, Kaliningrad, Omsk, Krasnoyarsk, Smolensk, Samara, Tomsk, Saratov, Khabarovsk, Krasnodar, Sochi, San-Petersburg, Ufa, Moscow, Novorossiysk, Veliky Novgorod. These Communities range from the Western Russian border with Finland, all the way to the eastern border with Japan.

During their visit to his office, the Prime Minister has thanked the members of the delegation saying “Lev Leviev, President of the FJC, your work in strengthening the Jewish identity, our heritage, the affiliation towards and Israel and Jewish education is highly important. I would also like to thank Michael Mirilashvili, who has joined these efforts and all the members of the delegation headed by Chief Rabbi of Russia, Rabbi Berel Lazar.”