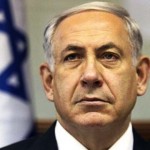 Israeli Prime Minister Bibi Netanyahu said in broadcast remarks on Tuesday there was a “huge, worldwide effort” to ensure he loses next week’s closely contested election.

Army Radio, which aired what it said were comments he made on Monday to activists of his right-wing Likud party, interpreted them as referring to foreign funding for advocacy groups campaigning for a change of government in Israel.

Political parties in Israel are banned from accepting money directly from overseas donors during an election campaign.

But such funding is allowed under Israeli law for non-profit organizations espousing political viewpoints, and US consultants have advised Israeli candidates for years.

“It is a very tight race. Nothing is guaranteed because there is a huge, worldwide effort to topple the Likud government,” said Netanyahu, who received rousing applause in the US Congress last week during a speech against a potential nuclear deal with Iran sought by the administration of President Barack Obama. Read more here.