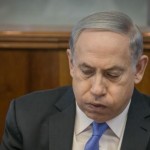 “Eventually there will be, I believe, a Palestinian leadership that will emerge and will embrace a genuine peace,” he told a group of young German leaders visiting Israel. “Not a false peace. Not a tactical peace, but a genuine peace.”

He blamed Palestinian refusal to recognize a Jewish state “in any boundaries” for the ongoing conflict. “We want to know that we have a partner that accepts our right to exist,” he said.

Until that moment, Israelis will continue building their state, he said, “and forge those links with those Arab states who want to see the defeat of medievalism and the triumph of modernity.” The current wave of Islamic terrorism terrorizing Western liberal democracies is not a clash of civilizations, but a “clash against civilization,” Netanyahu said.

He dismissed the notion of Israel as a colonial intruder. “We’re not Belgians in the Congo. Nor are we the French in Algeria or for that matter the Spaniards in Mexico. We’ve been around here a long time. And we recognize that there is another people here, even though they came thousands of years later. They still live here and we have to coexist.”