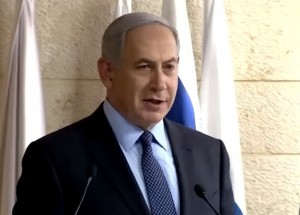 Israeli Prime Minster Bibi Netanyahu admonished a BBC journalist who asked at a press conference on Thursday if he was ready to resume negotiations with Palestinian Authority President Mahmoud Abbas.

“Are we living on the same planet?” Netanyahu sharply responded to Chief International Correspondent Lyse Doucet. “I’ve been calling day in, day out, in every forum… I’ve called on President Abbas to resume unconditional negotiations immediately.”

Netanyahu urged Doucet to instead ask Abbas if he is willing to talk to the Israeli prime minister. “Right now, as we speak, we can meet,” he said. “I’m willing to meet him, he’s not willing to meet me.”

“And you ask me about the resumption of negotiations?” he continued. “Come on, get with the program. These people don’t want negotiations. They’re inciting for violence. Direct your questions to them.”

Watch Netanyahu discussing the resumption of negotiations with Abbas in the video below via Arutz Sheva: