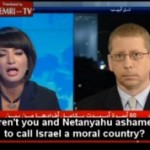 In an August 1st interview with Al Jazeera, Israeli Prime Minister’s Office Arabic spokesman Ofir Gendelman was grilled by Lebanese journalist Ghada Owais. In addition to her inference that Israel will stand trial at the International Criminal Court like the Nazis at Nurmemberg, Owais told Gendelman that Israel should be ashamed to call itself a moral country.

Owais further added that Hamas chief Khaled Mashaal’s theoretical defense at the ICC will include the fact that Israel tried to assassinate him and drive him out of Israel to make room for Jews of European descent.

Gendelman begins the interview by telling Owais that Israel agreed to seven humanitarian ceasefire initiatives, including the most recent one on Monday that was initiated by the UN and US.

“Hamas gave assurances to US Secretary of State John Kerry and to UN Secretary Ban Ki Moon through the mediation of Qatar that it would honor this ceasefire,” said Gendelman. “But Hamas immediately violated the ceasefire just as it violated and rejected all the previous ones.”

In a facetious tone, the anchor responded, “So Hamas is the terrorist here, and it is Hamas that violated the ceasefires, but who killed over 1,600 civilians, including hundreds of children, in Gaza? Was it Hamas that killed them? It was you.”

Owais asked, “Aren’t you and Netanyahu ashamed to call Israel a moral country?”

“And because we never, ever target civilians, Hamas bears full responsibility for the loss of civilian lives in the Gaza Strip.”

Owais quoted Defense Minister Moshe Ya’alon who said that Israel acted responsibly and with consideration. “I wonder when he [Ya’alon] stands trial at the ICC, like the Nazis in Nuremberg, he will tell the judge that the operation was conducted with ‘responsibility and consideration’ when he is asked about the killing of 1700 civilians in Gaza.”

Gendelman called her question “laughable,” telling her it is Khaled Mashaal and the rest of the terrorists who should stand trial at the ICC for killing hundreds and thousands of Palestinians.

Owais then retorted by asking Gendelman if he is referring to the same Mashaal that Israel tried to assassinate the Mashaal “whose family [Israel] has driven out.” She goes on to claim that these two facts would be part of Mashaal’s defense if he ever stood trial at the ICC.

“He will say that he was exiled because of the Jews you received from Russia, the Ukraine, and Poland,” said Owais.

When Gendelman asked Owais if she was speaking as a journalist or as a Hamas spokesperson, she responded, “Some journalists say worse things, I am being very fair towards you.”

She went on to claim that she is a very “fair and balanced journalist.”

Gendelman disputes her claim saying, “No journalist would speak like this.”