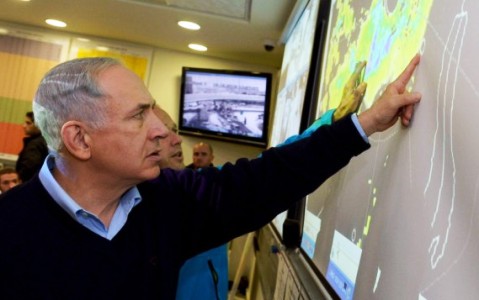 Asserting that Israel had prepared effectively for what he called a “once-in-a-century” storm, Israeli Prime Minister Bibi Netanyahu night praised the country’s authorities and its citizens for pulling together and averting disaster. “Thanks to the efficient work and excellent coordination… in almost impossible conditions,” he said, “many lives were saved.”

Netanyahu was speaking at a televised emergency meeting of city officials in Yerushalayim  – which was battered at the weekend by the worst ever December storm on record, and arguably the worst storm ever in modern Israeli history. “In other countries, storms like this have caused many losses of life.” He also thanked the IDF for making armored vehicles quickly available to clear blocked roads.

Opposition head Isaac Herzog (Labor), however, charged there had been a failure to prepare effectively. Herzog said he had warned of the severity of the storm on Wednesday. “My warnings fell on deaf ears,” he said, adding that Israel “should have activated the National Emergency Authority. There is a lack of preparedness.” Herzog also called the televised a meeting a “public relations stunt” that was inappropriate at a time when “thousands of Israelis don’t have any electricity.”

The storm left tens of thousands of households nationwide without electricity, downed 600 power lines, and closed the main roads into Yerushalayim for 48 hours.

Four fatalities were reported between Wednesday and SHabbos, but Netanyahu said the consequences could have been far worse. “We made saving lives a priority,” he said, with the focus on initiating contact with the elderly, the sick, and other needy and vulnerable Israelis. Read more at Times of Israel.