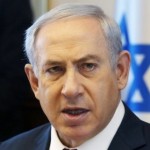 Israel is involved in a “world war” against two major streams of Islamic extremists and must deal with the threats they pose, Prime Minister Bibi Netanyahu said Tuesday, Times of Israel reports.

“Nobody said that the attacks would stop when a Jewish state arose,” the prime minister said at a President’s Residence ceremony to honor outstanding officials in the Mossad intelligence agency. Quoting Tehillim 121, he added: “He who watches over Israel will neither slumber nor sleep.

“Israel has enemies and friends for whom the very mention of the Mossad gives them ‘the chills,’” Netanyahu added. “They know that the long arm of the State of Israel is not a cliche but the real truth.”

Israel, the prime minister also warned, would respond with force to any attack against it — a thinly veiled threat to Hassan Nasrallah, the head of the Lebanon-based Hezbollah terror group, Times of Israel reports.

Nasrallah said Sunday that a retaliation for last week’s assassination of Samir Kuntar, attributed to Israel, would “inevitably come.” He said Israelis should be afraid in their own country, along the Israel-Lebanon border, and abroad.

But, said Netanyahu, “All our enemies should know that we will react with force against any attack against us.”