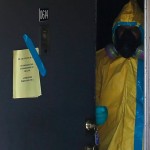 The the ongoing Ebola epidemic has mainly affected West Africa, growing concern in the West regarding the spread of the deadly virus has prompted Israel to take precautions.

Following an emergency meeting on the issue last week, Prime Minister Benjamin Netanyahu convened a second meeting on Sunday to cement Israel’s policy. In the meeting, the Israeli government decided to tighten the screening of people entering Israel from countries most prone to Ebola-Liberia, Guinea, and Sierra Leone.

The decision stipulates that every individual entering Israel from those countries by air, land, or sea will be screened with a questionnaire.

“The State of Israel is preparing to do everything possible to prevent Ebola patients from entering its territory,” Netanyahu said.