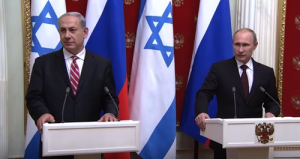 “I just had an important talk with Russian President Vladimir Putin. We agreed to deepen the coordination between us in order to prevent mishaps and to do so on a broad basis,” Netanyahu told reporters after his meeting with Putin on the sidelines of the Paris climate conference on Monday.

“I think that every citizen of Israel understands today, in light of recent events on the Turkish border, the great importance of my trip to Moscow and these ongoing contacts with the Russian president,” he added.

Netanyahu’s announcement comes on the heels of a statement by Israeli Defense Minister Moshe Ya’alon praising security coordination with Russia that has prevented Russia-Israel clashes in the region. According to Ya’alon, a Russian jet recently breached airspace, but the issue was “immediately fixed through communications channels.”

In late September, Netanyahu met with Putin in Moscow to establish a mechanism in order prevent any inadvertent clashes between Israeli and Russian forces operating in Syria.