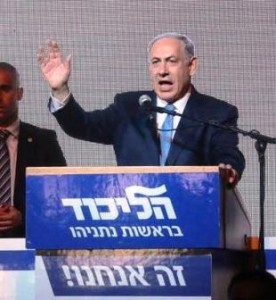 Prime Minister Bibi Netanyahu released a statement early this morning inviting potential coalition partners to enter talks right away for the swift quick creation of what is expected to be a religious-nationalist government.

Netanyahu stated that he had already spoken with the leaders of parties that he plans to invite into his coalition, including Bayit Yehudi head Naftali Bennett, Kulanu’s Moshe Kachlon, Shas leader Aryeh Deri, UTJ’s Yaakov Litzman and Moshe Gafni, and Yisrael Beytenu’s Avigdor Liberman.

“The reality isn’t waiting on us,” Netanyahu said. “Reality isn’t taking a break. The citizens of Israel expect us to quickly put together a leadership that will work for the sake of the country’s security, economy, and society as we promised to do, and that is what I will do.”