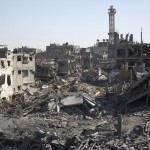 Israel has resumed military operations in the Gaza Strip after offers, counteroffers and accusations surrounding the establishment of a new 24-hour humanitarian truce seemed to go nowhere.

After a 12-hour cease-fire that ended on Shabbos, there had been talk of extending the truce, but at first, Hamas reportedly rejected the offer. But by Sunday afternoon, Israel time, the Islamist group had reportedly agreed to a 24-hour cease-fire to coincide with the beginning of Eid al-Fitr, the Muslim holiday that ends the holy month of Ramadan.

“It’s continuing to fire at us as we speak,” Netanyahu said, adding that Israel “will take what ever action is necessary to protect our people.”

Initially, Israel was adhering to a 24-hour ceasefire of its own, but called it off after Hamas fired rockets.

On CBS’ Face the Nation, the Israeli premier also accused the Palestinians of using civilians as “human shields” and that despite growing concern over the dead in the 19-day offensive, said Israel would not flinch from the operation.