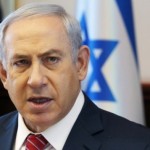 Netanyahu had on Wednesday denounced a “shocking” video clip showing far-right extremists celebrating the killings of the Dawabsha family in a July firebombing attack on their home, joining dozens of other politicians and public figures coming out against the taped incident.

He renewed his criticism of religious right-wing radicals, however, at Sunday’s cabinet meeting, saying those filmed were “extreme and marginal, and certainly don’t represent religious Zionism.”

He said he wanted to emphasize that religious nationalist Jews were dedicated supporters of the state and contributed to its security by serving in the IDF and its elite units.

Politicians from both sides of the aisle strongly condemned the clip, aired Wednesday by Channel 10, which shows revelers at the Jerusalem celebration waving knives, rifles, pistols and a Molotov cocktail.

“The shocking images broadcast tonight show the true face of a group that constitutes a threat to Israeli society and Israel’s security,” Netanyahu said Wednesday. “We will not accept people who violate the state’s laws and do not see themselves as bound by them.”