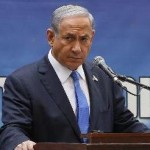 Israel will begin asking countries with whom it has friendly ties and who want Israeli cooperation to change their anti-Israel voting patterns at the UN, Prime Minister Bibi Netanyahu said Monday after speaking with numerous heads of state at the climate conference in Paris.

Netanyahu said leaders from around the world – including Arab states – approached him at the conference to talk about counter-terrorism and technological issues.