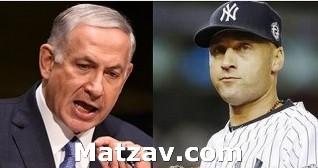 In a United Nations often noted for a pro-Arab, anti-Israel bias, Netanyahu got a surprise round of applause for some of his remarks – particularly as he called Iran to task over terrorism.

“ISIS must be defeated, but to defeat ISIS and leave Iran as a threshold nuclear power, is to win the battle and lose the war,” Netanyahu told the UN General Assembly.

As he has for years, Netanyahu made an impassioned plea to stop Iran from getting the bomb. He used now-retired Yankees Captain Derek Jeter in his speech to illustrate his point.

“The Middle East is in chaos,” Netanyahu continued. “States are disintegrating. And militant Islamists are filling the void. Israel cannot have territories from which it withdraws, taken over by Islamic militants yet again as happened in Gaza and Lebanon. That would place the likes of ISIS within mortar range – a few miles of 80 percent of our population. Now think about that: The distance between the 1967 lines and the suburbs of Tel Aviv is like the distance between the UN building here and Times Square.”