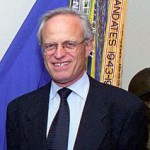 The Israeli Prime Minister’s Office accused former US Mideast envoy Martin Indyk of fabricating a conversation he said he had with Bibi Netanyahu at Yitzchok Rabin’s funeral in 1995, when Netanyahu was head of the Opposition.

Indyk, who in various speeches and interviews over the last few months has been sharply critical of Netanyahu and his policies, said in a PBS Frontline program on Netanyahu that aired Tuesday evening that he sat next to Netanyahu at Rabin’s funeral. Indyk at the time was US ambassador to Israel. Read more.