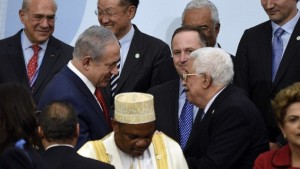 Israeli Prime Minister Bibi Netanyahu and Palestinian Authority President Mahmoud Abbas today had an unplanned meet-up on the sidelines of the Paris climate change conference, shaking hands for the first time in years.

Only the New Zealand prime minister stood between the two leaders during the group photo of more than 150 world leaders attending the summit.

After the pictures were taken, the two shook hands for the first time since 2010.

Mogherini and Netanyahu discussed the prime minister’s decision to suspend the EU’s involvement in the Israeli-Palestinian peace process in response to the bloc’s decision to label goods imported from Jewish settlements.

The EU diplomat told Netanyahu that Europe “would continue to work on Middle East Peace Process, in the Quartet, with its Arab partners, and with both parties, as peace in the Middle East was an issue of interest to the entire international community and also to all Europeans,” a spokesperson said.

An EU spokesperson told reporters Monday that the EU’s relations with Israel were “good, broad and deep and that this would continue.”