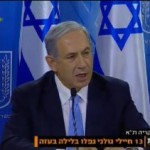 Israeli Prime Minister Binyamin Netanyahu stated on Motzoei Shabbos that Operation Protective Edge in Gaza will continue “for as much time as necessary,” despite earlier reports indicating that some IDF forces may be withdrawing, Arutz Sheva reported.  The Prime Minister explained that some troops are being distanced from civilian areas where the IDF has achieved its objectives to prevent unnecessary friction.

“From the beginning, we promised to return the quiet to Israel’s citizens and we will continue to act until that aim is achieved. We will take as much time as necessary, and will exert as much force as needed,” he said in a public address.

“I hurt with the bereaved families and send them my condolences and the condolences of the Jewish people,” he said. “They sacrificed their lives and they fell to defend our country, our home. My heart and the entire nation’s hearts are with each and every one of them. I have personaly experienced how they feel.”

Referring to reports that the IDF has said it has destroyed nearly all Hamas tunnels, and will complete the destruction of the rest in the coming days, the Prime Minister said that this was what is being done in Gaza, but that “Israeli geniuses are already coming up with answers to both the tunnel and mortar fire challenges that can be employed from within Israel”.

Earlier, the Israeli army on Saturday informed residents of Beit Lahiya in northern Gaza that it was “safe” to return to their homes, as troops began withdrawing from the area.