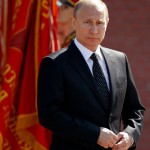 There is a “high probability” that Russia will invade eastern Ukraine under the guise of a humanitarian mission, NATO warned on Monday. Still, a defiant Vladimir Putin said that an aid convoy will be sent into the country.

Warnings of a Russian invasion have become increasingly urgent this week, as Ukraine reports that Russia has massed 45,000 troops along its border.

In a statement about a call European Union chief President Barroso placed to the Russian president on Monday, the commision said “President Barroso warned against any unilateral military actions in Ukraine, under any pretext, including humanitarian.”

The Kremlin mostly ignored this. “It was noted that the Russian side, in collaboration with representatives of the International Committee of the Red Cross, is sending an aid convoy to Ukraine,” the Kremlin said in a statement. Read more at Reuters.