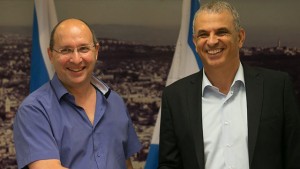 A general strike that was to go into effect at 6 a.m. Wednesday was averted after Histadrut Chairman Avi Nissenkorn and Finance Minister Moshe Kachlon came to a last-minute agreement.

The parties have agreed that 450,000 public-sector employees will receive a total pay increase of 7.5% and a one-time payment of NIS 2,000, and for the first time the salary supplement will be distributed differentially to help lower income-earners more. It was also agreed to continue the discussions and to report on developments in the negotiations by January 3, 2016.

They agreement is valid for a five-year period, from January 2013 to December 2017. The agreement establishes that public-sector workers will receive a total pay increase of 7.5% spread out over 3.5 years. This translates into a budget increase of NIS 7.5 billion, as compared to the Histadrut’s original demand for NIS 11 billion.