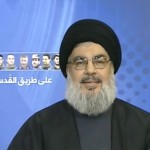 Hezbollah terror leader Hassan Nasrallah gave a speech today in honor of “Martyrs Day,” “We are proud that Hezbollah was raised as an issue in Obama and Netanyahu’s meeting. This means that we are in the right place regarding having influence in the Middle East.”

Nasrallah boasted about his terror organizations’ achievements in Syria and stressed that Israel will continue to conduct a “shadow war” against his terror group but will never implement a military operation in Lebanon because they know “that they will pay a price.”

“The possibility of war is valid and exists all the time but between us, we think the likelihood of this is low because of the balance of deterrence that exists regarding Lebanon,” he noted. Nevertheless, Nasrallah stressed that Israel continues “to attack security targets, to distort the picture, and to invest efforts into the media.”