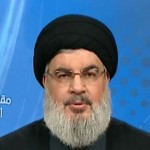 Hezbollah Secretary General Hassan Nasrallah on Monday addressed the targeted killing of notorious terrorist Samir Kuntar in a televised speech on Monday, saying that the group holds Israel responsible for the killing with complete certainty.

Nasrallah vowed that Hezbollah would retaliate in any place and at any time.

The secretary general declared that he and Kuntar always knew the terrorist would be marked for death by Israel, because, he claimed, Israel never forgives – unlike Hezbollah.

The leader of the terrorist group announced that Kuntar’s death would not weaken the Palestinian cause. The generation of Palestinians alive today is the one born when Kuntar returned to Lebanon after his release, said Nasrallah, and the young Palestinians have chosen the way of martyrdom.

The terrorist chief also claimed that the United States has spent millions of dollars on creating a rift between Lebanon’s youth and Hezbollah.

Nasrallah concluded by saying that Hezbollah would continue to be the enemy of the US, Israel, and anyone acting against the group. “We will not surrender and will not retreat,” he said. “The United States’ moves are recognition of Hezbollah’s role and proof that it is part of the front fighting American and Israeli plans in the region. I say to the Americans, the Israelis and all their allies: neither the moves against as not sanctions will hurt us – they will only make us continue on our path.”

Thousands attended Kuntar’s funeral earlier Monday, including not only many senior Hezbollah militants, but also Lebanese politicians and leaders of Palestinian factions in the country.