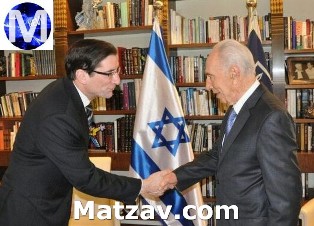 President Peres explained that Israeli chutzpah was the key to success: “Israeli audacity and the desire to change, to improve life standards and to dare – they are the true drive of Israeli companies.”

Peres believes Israel success as a ‘Start-Up Nation’ is a result of it being surrounded by hostile countries, situated on a primarily desert region with no natural resources. “Israel relies on science, technology and its human resources. There is no question that today’s Israeli hi-tech companies received a strong basis and a push by Israel’s military industries.”

President Peres elaborated on the latest technological achievements by Israeli developers, offering a glimpse into the future: “After the success of Nano technology which was a true Israeli technological revolution, the next technology development I think will be the augmentation of human capabilities.”
At the conclusion of their meeting Greifeld wanted to hear about Peres’ legendary rigorous daily schedule.