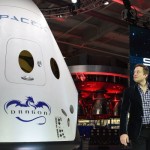 Virgin Galactic has nothing on this. NASA is set to announce Boeing and SpaceX will build what’s being called “space taxis” to transport astronauts to the International Space Station and beyond.

The decision mixes Boeing’s decades of experience with the upstart ingenuity of Elon Musk’s SpaceX. The deal would replace NASA’s reliance on Russian spacecraft rentals, which cost roughly $70 million a seat.

Meanwhile, NASA is working on its Orion system that will be capable of delivering people to Mars. Read more at NBC News.