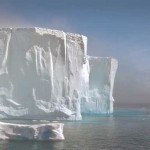 In 2013, the Intergovernmental Panel on Climate Change said the Antarctic ice sheet had lost large amounts of mass with little or no gain, but new NASA studies say the opposite.

Zwally added that “Antarctica is not currently contributing to sea level rise, but is taking 0.23 millimeters per year away.”

But, he added that if sea levels are rising 0.27 millimeters a year worldwide and the water is not coming from Antarctic ice melt, it has to be coming from somewhere else that “is not accounted for.”