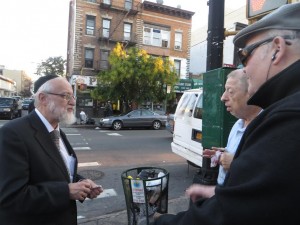 As the Orthodox Jewish community in such Brooklyn neighborhoods as Borough Park and Williamsburg developed several decades ago, those areas were quite suitable for everyone who wished to reside there. However, the continued success of a flourishing community in more recent years has generated its own problem – namely, families already forced to seek space beyond the immediate borders of those two heavily populated neighborhoods found themselves confronted with a looming housing crisis of serious proportions.
The challenging situation has forced many families – who deeply desire to remain in the immediate vicinity of their extended families and beloved communal institutions – to live in notably unsuitable apartments, such as dark basements, or to raise a large number of children in a decidedly cramped two-bedroom apartment.
This crisis has had a devastating impact on the welfare and peace of mind of numerous such families.
Yet, despite the urgency of the situation, we barely see our elected officials or community leaders taking action to address the problem.
This crisis threatened to worsen even more as the years go by, until R’ Nachman Caller, a noted Borough Park-based Real Estate Attorney, jumped in to fill the vacuum of leadership and tackle the issue by all responsible means.
R’ Nachman Caller’s announcement earlier this summer that he has decided to run for the State Assembly came as a breath of fresh air to the many families who worry about finding a home for their married children, and ushered in a moment of new hope. R’ Nachman has made the housing issue a key focus of his campaign to represent the 48th Assembly District in Albany, and he is determinedly carrying the flag of solving our housing crisis as a bedrock commitment to beneficially shape the future of our community.
In his professional capacity as a real estate lawyer, R’ Nachman Caller has already helped develop thousands of housing units from both sides of the spectrum. As a real estate investor himself, he oversaw the building of numerous apartments in Borough Park. And as a devoted community activist, R’ Nachman has advocated in City Hall as well as in Albany to provide tax breaks to landlords and developers building rental apartments.

Backed by a comprehensive plan and a vision to tackle the issue heads on – whether by reducing government regulations or finding more land for rezoning – R’ Nachman is committed to solve our community’s housing crisis once and for all.
“When elected to the State Assembly, I will bring in a new era of housing development to our neighborhood,” stated Assembly candidate R’ Nachman Caller. “The time has come to point the finger at the most important issue affecting our community. If I do not prevail, I will at least be satisfied that I have brought up the issue and put it in the minds of our many elected officials and government agencies.”
“We have not gotten our fair share in the several housing plans that have been introduced over the past decade,” R’ Nachman asserted. “When the Bloomberg administration changed the zoning rules to allow more housing developments, and laid out a plan of 160,000 affordable housing units, all our community got was 252 units! Out of 160,000 units, in some 70 Assembly Districts in the City of New York, we got a mere 10 percent of our fair share.”
“Where were we when over 2,000 affordable units were taken from Borough Park, Midwood and Flatbush, and given away to other neighborhoods? Where was the outrage when other neighborhoods got more on the backs of our struggling class?” he asked.
“For that alone, we deserve a new Assemblyman who will fight for our rights, someone who has the experience in the real estate and housing markets, and the knowledge of relevant state law, in order to preserve our community and bring relief to the many families struggling under this crisis,” R’ Nachman Caller proclaimed.
“While the emphasis is on the housing crisis, the effect that it has had on the local economy and the prosperity of our community has also been underestimated. Due to the high rent charges, many people succumb to their debt and become financially crippled under the burden of raising a family, paying their bills and working overtime to pay rent. This ultimately affects our local groceries and shops, driving the economy into a ditch,” he added.
With the election of R’ Nachman Caller on November 4th, families in our community will immediately see a change of attitude and feel the hope of a new era, in which our community will build, flourish and expand, to the ultimate joy of the many parents and grandparents, and the general working class.