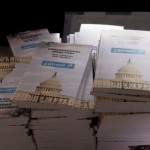 J Street, the left-wing Jewish organization dedicated to undermining Israel’s campaign to prevent Iran from acquiring nuclear weapons capability, is in hot water after publishing the results of a poll that claimed 84 percent of American Jews back President Obama’s diplomatic overtures to the Tehran regime.

No link to the poll appears on the J Street website. Nor was there any detail provided about the number of respondents polled, or the phrasing of the questions posed.

A number of social media commenters suggested that the numbers provided by J Street were entirely fabricated. And by J Street’s own admission, the results are actually contradictory.

A report in the Christian Science Monitor, which quoted the 84 percent figure without independently verifying it, noted that the J Street “survey registered a strong sense of connection to Mr. Netanyahu among American Jews, even though its results suggest they don’t support his policies. Asked to gauge on a scale of 1 to 100 their feelings of warmth toward various leaders and personalities, respondents gave Netanyahu a 61 – higher than Obama (49) and Hillary Rodham Clinton (57).”

Moreover, a small line of text underneath the ’84 percent’ claim – “strong support for progress made by P5+1″ – indicates that respondents were asked an entirely different question, meaning that J Street’s claim that the vast majority of American Jews reject Netanyahu’s stance contains a heavy dollop of spin.J Street’s Communications Director, Jessica Rosenblum, merely deepened the confusion while trying to clarify it. “The prime minister is personally popular with American Jews. The difference here is that they have deep concerns about the policies he’s pursuing,” she told theChristian Science Monitor. Rosenblum made no attempt to reconcile Netanyahu’s personal popularity among American Jews with the assertion that the vast majority of them reject his position on the main security threat Israel currently faces.

The Christian Science Monitor also quoted Dylan Williams, J Street director of government affairs, as saying, “I don’t think Jewish Americans are different from where the general American population is on this.” However, a recent Gallup poll pointed towards the polar opposite conclusion, with 84 percent of respondents having a “mostly unfavorable” or “very unfavorable” view of Iran.

J Street is currently running an aggressive campaign opposing Netanyahu’s forthcoming address to the US Congress, using the hashtag #Bibidoesn’tspeakforme. A petition being run by the organization goes so far as to describe Israel’s ambassador in Washington, Ron Dermer, as the envoy of Netanyahu, and not the State of Israel.

The offense was compounded by a screenshot (above) which showed that among the petition’s signatories were Nazi leaders “Adolf Hitler” and “Rudolf Hess,” as well as the American black nationalist leader “Malcolm X.”