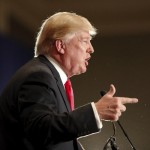 A protesting Muslim woman was ejected from a rally for Republican presidential hopeful Donald Trump on Friday.

Rose Hamid, who wears a hijab, was sitting in the stands behind Trump. When Trump said that Syrian refugees may be affiliated with the Islamic State, Hamid stood up in protest.

After Hamid and other protestors were escorted out, Trump said of the disturbance: “There is hatred against us that is unbelievable It’s their hatred, it’s not our hatred.” Read more at CNN.