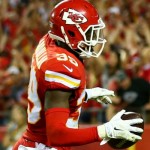 A Muslim NFL player was slapped with unsportsmanlike conduct for a religious celebration that went unpunished in Christian counterparts, like Tim Tebow. The NFL said it was mistake to punish Husain Abdullah of the Kansas City Chiefs with a 15-yard penalty after he prostrated himself and prayed in the end zone.

Referees said his celebration after rushing 39 yards and intercepting a pass by New England Patriots’ Tom Brady violated the NFL rule stating: “players are prohibited from engaging in any celebrations or demonstrations while on the ground.” The problem is there is an exception for religious expressions, like the famous Tebow kneel.

“The officiating mechanic in this situation is not to flag a player who goes to the ground as part of religious expression,” league spokesman Michael Signora said via email, and as a result, there should have been no penalty on the play.”

The NFL’s response followed the Council on American-Islamic Relations’ request that the league explain its decision to “prevent the appearance of a double standard.” Read more at the Kansas City Star.