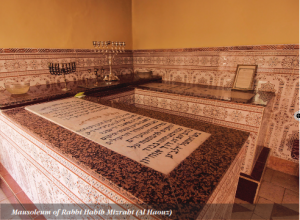 In an enlightened experience on Nov. 19 at the New York Museum of Modern Art, distinguished members of different faiths convened to honor King of Morocco Mohammed VI for his effort to preserve Jewish burial places in the overwhelmingly Muslim nation. Standing together in brotherhood were His Eminence Cardinal Timothy M. Dolan, Archbishop of New York; His Eminence Archbishop Demetrios, Primate of the Greek Orthodox Archdiocese of America; Rabbi Arthur  Schneier, president of the Appeal of Conscience Foundation; and Imam Mohamed Hamagid, President of the Islamic Society of North America.

At a time of tension and anxiety in the world, the Council of Jewish Communities of Morocco worked with religious leaders and the Conference of Presidents of Major American Jewish Organizations to bring these people together to honor of King Mohammed VI for his work rehabilitating the Jewish cemeteries of Morocco.

The completed projected, poignantly called “The House of Life,” is chronicled in a photo journal that the King and the Conference of Presidents hope to soon see exhibited in a museum. When religious historic sites are seen being destroyed in parts of the world, a rarer find is when such efforts are undertaken to restore and preserve history, no matter the religion that produced them.

Schneier thanked His Majesty Mohammed VI “for being a role model of interreligious peaceful coexistence between the children of Abraham.” He then said, “The high award Commander of the Wissam Alaouite to Cardinal Dolan, Archbishop Demetrios, Imam Hasgmagid and myself, is a recognition of our unity in diversity in pursuit of peace and tolerance. United we shall prevail over the terrorist scourge that has metastasized, united we shall prevail over the wreckers of civilizations.”

Morocco’s “House of Life” project began in April 2010 under the direction of King Mohammed VI. Over the course of five years, 167 Jewish cemeteries were restored across the country, installing 159 new doors, building nearly 140,000 feet of fencing, and repairing 12,600 graves.

The king said, through Ambassador Serge Berdugo, “This is a testimony to the richness and diversity of the kingdom of Morocco’s spiritual heritage. Blending harmoniously with the other components of our identity, the Jewish legacy, with its rituals and specific features, has been an intrinsic part of our country’s heritage for more than three thousand years. As is enshrined in the kingdom’s new Constitution, the Hebrew heritage is indeed one of the time-honored components of our national identity.”