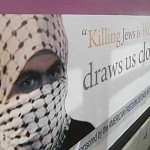 Last year the MTA opposed the ad, sponsored by the American Freedom Defense Initiative, arguing that it could spark terrorism or violence. The initiative sued the authority in October and Judge John Koeltl ruled that the ad was protected under free speech.

The poster shows a man with his head and face wrapped in a scarf, next to the quote, “Killing Jews is worship that draws us close to Allah.” The ad then asks, “That’s His Jihad. What’s yours?” An MTA spokesman said they are “disappointed” by the decision and reviewing options. Read more at the New York Daily News.