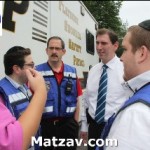 It was a little over 22 years ago that my husband Shlomo a’h donated four two-way radios to a fellow Flatbush resident who was hoping to make our neighborhood a safer place to live. I can’t imagine that either my husband, or the recipient of those radios, Chaim Deutsch, had any idea that they were launching a citizens patrol that would flourish over the next two decades, playing a significant role in reducing crime in the Midwood area and helping area residents in numerous other ways.

In keeping with Chaim’s vision of creating a group that would be both effective and professional, members of the Flatbush Shomrim Safety Patrol were trained by both the NYPD and mental health professionals, giving them the resources with which to combat the high crime rate in the area, as well as a greater ability to better understand people with other problems and issues. Despite his position as the founder of Shomrim, Chaim was always out on the streets, and instead of just spending his time managing his ever-growing crew of volunteers, Chaim played an active role, helping people day and night and volunteering for active duty seven days a week in order to once again make Flatbush safe for residents. Under Chaim’s watchful eye, Shomrim grew into a volunteer corps that functioned as a bridge of sorts between the police and the community and crime rates in Flatbush dropped dramatically.

Chaim’s volunteerism didn’t end with Shomrim. His time on the streets made him acutely aware that there were many teens that were straying and were in desperate need of guidance. Over time, as people learned of Chaim’s devotion to others, they would approach him with personal problems both large and small. The word “no” wasn’t in Chaim’s vocabulary and he would do whatever was necessary to set things right. How many times did Chaim step in when someone was making a wedding or a bar mitzvah and couldn’t afford to pay for their child’s simcha, making the necessary arrangements without fanfare? Chaim has intervened on behalf of people who couldn’t make ends meet over and over again and has come through for residents who couldn’t afford to put food on their tables, working tirelessly to help people through financially trying times with dignity and respect.

As co-chair of Task Force for Children and Family Services comprised of mental health professionals and numerous leaders of organizations, I have seen Chaim prove himself to be a team player and an invaluable source of knowledge and resources to help difficult jobs get done. Chaim has also demonstrated his abilities as a leader who is willing to step up and tackle any problem head on and I have personally been privileged to work with Chaim on numerous occasions and witness his unparalleled dedication and devotion. When a teenage girl was thrown out of her parents’ house, Chaim was the one who contacted me, asking me to find her a safe place to stay. When domestic violence reared its ugly head in another family, Chaim was the one who called me to arrange alternate living arrangements for the woman and her children in order to keep them out of harm’s way. Not content with finding quick fixes to these problems, Chaim followed up on every situation, making sure that long term solutions were in place and that the problems were dealt with effectively.

When Hurricane Sandy brought the New York City area to a standstill, Chaim and his team of volunteers were there, knocking on doors, evacuating residents and rescuing those who were trapped. When local streets were impassable because of fallen trees and other debris, Chaim and his crew literally spent hours clearing the roadways so that emergency vehicles could get into the affected areas. Despite having his own life threatened, Chaim has taken on drug dealers in our neighborhood, closed down private gambling houses and most recently, has taken a stand against the missionary center that just opened up in the heart of Flatbush.

Chaim Deutsch may be running for City Council but he is anything but a politician. He is someone who lives to help others and to do everything in his power to make his community a better place to live. Over the years Chaim has demonstrated his commitment to our community time and time again and he has the proven experience, the professionalism and most importantly, the big heart that are all vital components of being an effective public servant. As a member of the City Council, Chaim will have the flexibility to serve the entire Flatbush community and I firmly believe that once elected, he will be able to accomplish a tremendous amount for all sectors of the population. He knows the issues that our community faces and as our City Councilman, Chaim will be able to continue fighting and advocating for us.

My husband Shlomo loved Chaim dearly and held him in the highest esteem. I am proud to go on record as endorsing his candidacy. Please vote for Chaim Deutsch in the general election on November 5th.